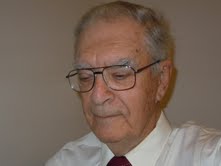 I was born to a sergeant in the U.S. Army Air Corps and his wife in Muskogee, Oklahoma.  The Army did not leave anyone in one place for very long,  so we left there when I was five years old and moved to Atlanta,  Georgia where I started first grade.  When the war started,  my dad was sent to Panama and mom moved us to California where her folks were.  After dad came back, we moved several times,  I don’t remember the order:  L.R., Arkansas;  Birmingham,  Alabama;  Ashville,  N. Carolina;  Springfield,  Ohio;  South Sudbury, Massachusetts;  and dad’s last assignment before he retired,  Amarillo,  Texas.  We had no home,  but mom and dad had been looking at ads and we wound up on a nice forty acre farm near Mount Magazine,  Arkansas, our first “permanent” home.

I graduated from Magazine High School where I met the love of my life, Miss Sewretha Jewel Douthit.  There wasn’t much that country kids could do who had very little money but wanted to spend time together except go to church with each other or get together to study.  Sue’s family was Primitive Baptist and she was baptized in a creek near the church when she was about eighteen.  I waited a year and joined when I was nineteen.  We married when we were twenty and moved to Houston,  Texas,  where we were told there were “lots of jobs”.  The draft was on then,  and I found that I could get only temporary jobs, like helping to take inventory, as no one wanted to spend money on training a guy who might be drafted any day.  I soon tired of that situation and volunteered for the draft.  After my training, Sue came and I was allowed to live off post,  and we subsisted on $140 a month.  I spent my entire two year service at Fort Bliss in El Paso, Texas.

Back in Houston,  I was lucky enough to get a job in the petrochemical industry learning to be a draftsman.  I worked at that trade for about forty years.  Life was good.  Our only child,  a son, was born. Our time was spent on work, friends, church on Saturday night and Sunday, and just “stuff”.

Meanwhile,  our pastor in Houston,  Elder Jess Collins would sometimes call on one of the old gray hairs to introduce for him,  hoping that would give him a subject to preach on.  I thought that when I got old I might have to do that for him too.  One Saturday night he stood up,  looked back at me in a middle row and said “Brother Holder,  come up and introduce for me”.  I had been thinking about a scripture that bothered me for two or three months and just recently got some light on it,  I felt,  so of course that’s what I talked about.  Well,  from then on,  no matter where I went,  I was called on to speak.  After about a year of this,  my church gave me liberty to preach.  In 1970, Ephesus Primitive Baptist Church ordained me to the full work of the ministry.

After Elder Collins died,  I pastored our church in Houston, a church near Madisonville,Texas, one in Bryan,  one near Cameron,  one in Troup,  served as moderator of the Primitive Association of Texas, and visited other states as time allowed.

My interest in history was sparked by some preachers saying that we were “THE” church.  I knew that some other churches made similar claims, and being a curious person,  I wondered how could you prove or disprove this claim?  The only answer is history,  what did the original Christians believe?  I offer this information in hope of edification.

My wife developed Dementia and my own health began to be a problem, so we sold our house and moved to a retirement facility where I live now.